11 things you need to know about New Orleans' new airport terminal, opening in 2019

11 things you need to know about New Orleans' new airport terminal, opening in 2019 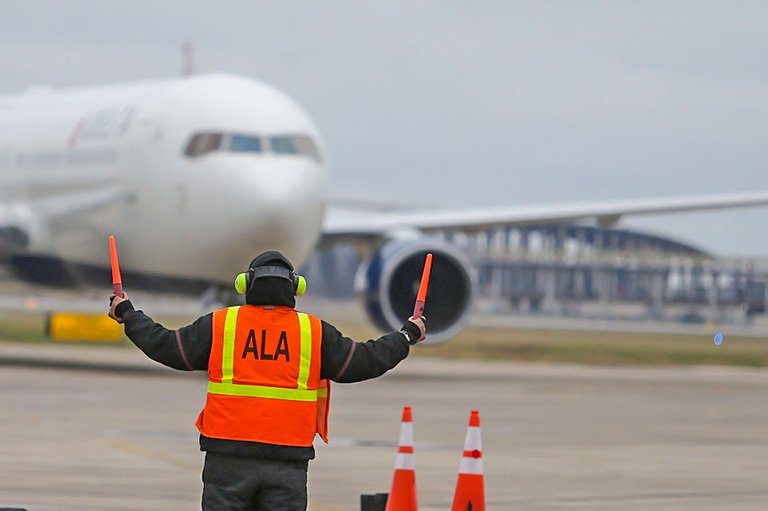 Construction crews are more than halfway finished with New Orleans' new airport terminal, a $993.7 million project with 35 gates and a brand new 2,100-space parking garage. The terminal is set to open in February 2019.

Here are 11 things you should know about the airport project and what we can expect when flights begin there early next year. The following photos show renderings of the new airport and what the facility looks like as of now. 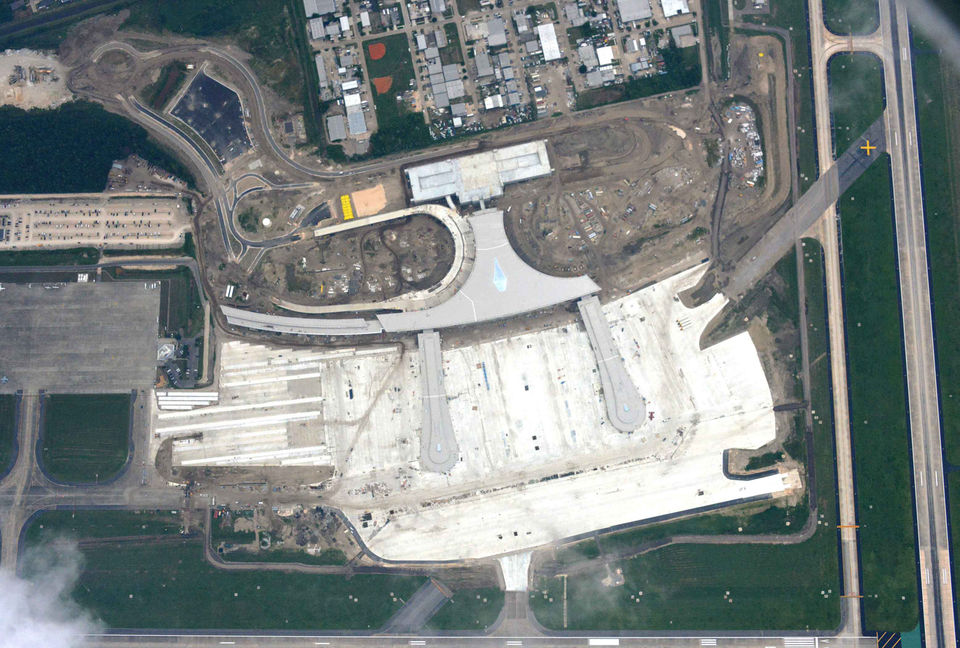 You read that right. When the new North Terminal opens in 2019, it will completely replace the existing airport terminal on Airline Highway. Starting sometime in February, if you're a commercial passenger flying out of New Orleans, you will be catching your flight at the new terminal.

The only things that will remain in use are the airport runways and other airfield infrastructure (the terminal is being built on the north side of the existing airport property) as well as some of the airport's auxiliary facilities, like the existing parking garage, which will be converted to a long-term parking area.

Officials are still thinking about what they want to do with the old airport building.

Erin Burns, director of communications for the New Orleans Aviation Board, which oversees Louis Armstrong International Airport, said the airport has hired a consultant to review and present options for the old airport building along Airline Highway. Burns said the board hopes to introduce an action plan for the old airport building sometime this fall. 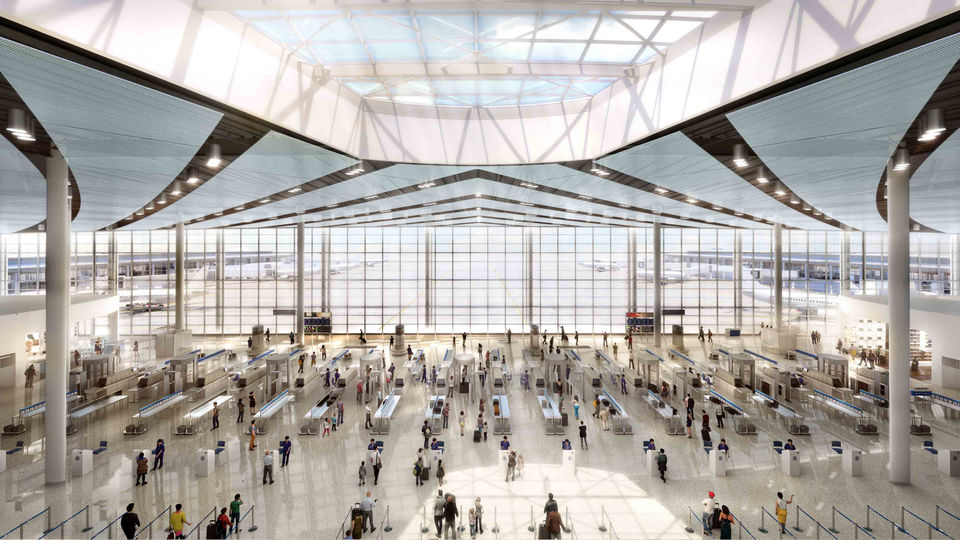 This will be a big change for those used to the existing airport set up, which has separate TSA security checkpoints for each concourse. The new terminal will have a single, consolidated checkpoint, which all passengers will go through, regardless of which concourse you are headed for.

Once beyond the checkpoint, passengers will be able to move freely between the airport's three concourses, including, for example, walking to different food options at various ends of the airport. No more being trapped in a concourse with food options that don't appeal to you. 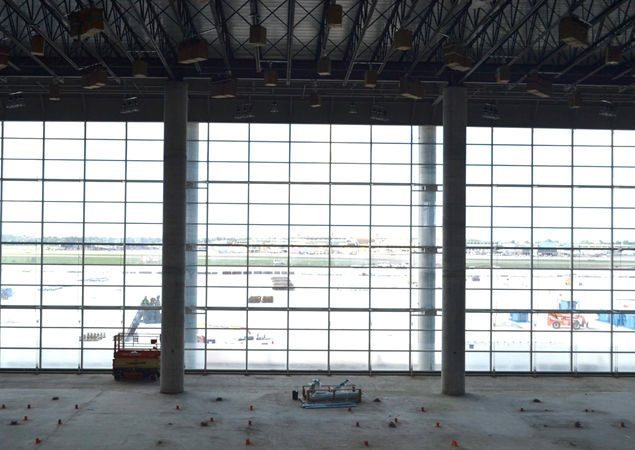 The security checkpoint area of New Orleans' new airport as of June 2018. Construction is set to be complete by February 2019. (Courtesy New Orleans Aviation Board)
Expect lots of windows.

The new terminal's design is open and airy with a glass facade that gives wide views of the airfield. The terminal is arranged in an arc shape and one of the primary design features is a giant skylight in the main arrivals hall, which will let natural light in.

Food and retail will be located down the center of each concourse, allowing for more windows overlooking the airfield. In addition, the design includes a "jazz garden," which will have greenery and a round stage where local musicians can perform.

The terminal was designed by Cesar Pelli of Pelli Clarke Pelli, Manning Architects, and the Crescent City Aviation Team, a joint venture of Leo A. Daly Company and Atkins North America Inc. A team of companies -- made up of Hunt Construction Group of Indianapolis, and Gibbs Construction, Boh Bros. Construction, and Metro Service Group of New Orleans -- is managing the project's construction. 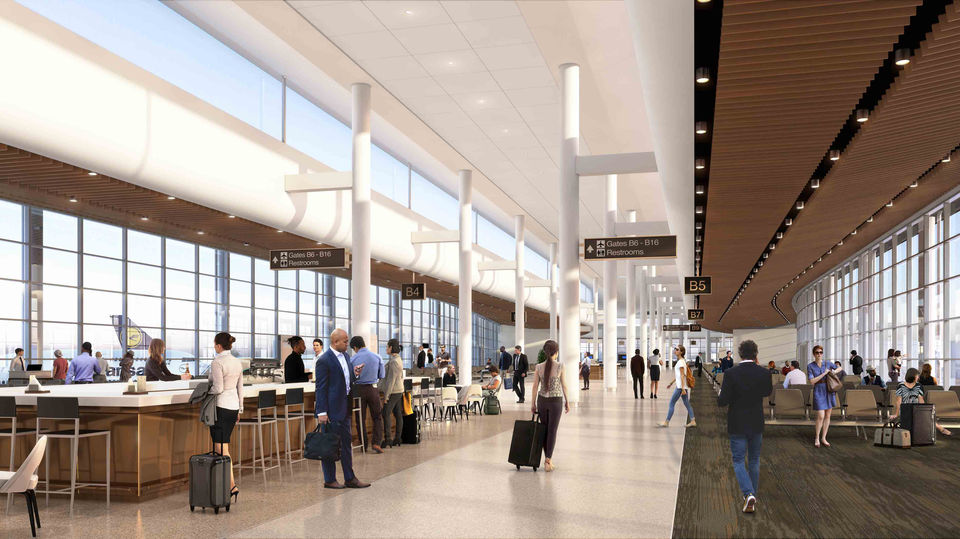 Sure, windows are cool and all, but let's get down to brass tacks -- what is there to eat and drink? Expect a mix of local restaurants as well as big national brands like Chick-Fil-A and Starbucks.

Last January, the New Orleans Aviation Board picked two concessions groups to run the food and beverage program at the new airport -- Delaware North-Chase Catering and Concessions, and HMS Host-Coaxum Enterprises-Kaleidoscope Strategies. The goal for the new airport, according to a statement from officials, is "to have a world-class, award-winning program that provides competition and a mix of local and national brands that fit all price points."

Here's an overview of the food and beverage offerings each of the groups is bringing to the table. 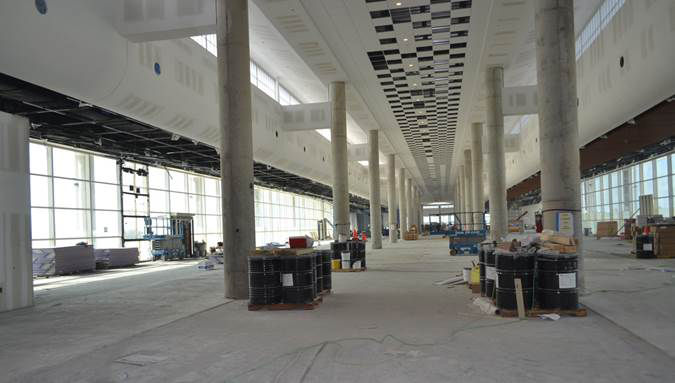 A concourse at New Orleans' new airport terminal as of June 2018. Construction is set to be complete by February 2019. (Courtesy New Orleans Aviation Board)

Food and retail will be located down the center of the concourses, allowing for more windows and for passengers to see their gate.

In addition to the food program, a selection committee has tapped two groups, Paradies Lagardere and Pacific Gateway, to oversee news and gift programs at the new facility. Retailers will also be a mix of local and national brands. Here's an overview of the retail offerings. 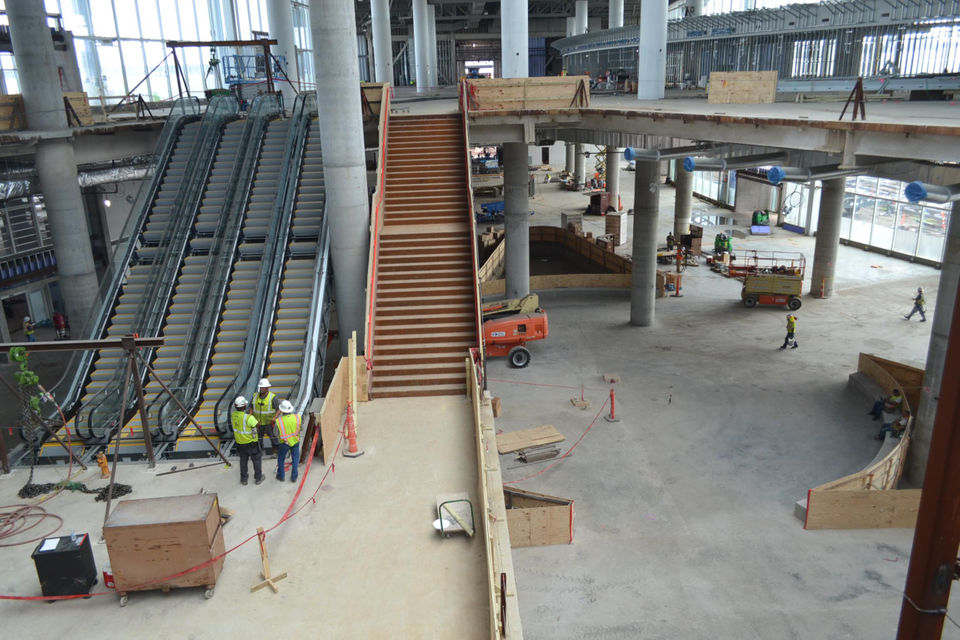 The arrivals area at New Orleans' new terminal as of June 2018. Construction is set to be complete by February 2019. (Courtesy New Orleans Aviation Board)
Parking options at the new facility include a new garage and surface lots.

Parking has been tight at the New Orleans airport as it continues to see growth in the numbers of passengers it serves, particularly during busy travel holidays. The North Terminal will have a new 2,100-space parking garage and surface lots just outside the terminal.

As of now, it appears the third-party, long-term parking providers that line Airline Highway will also be staying put. None have announced plans to relocate closer to the new terminal. 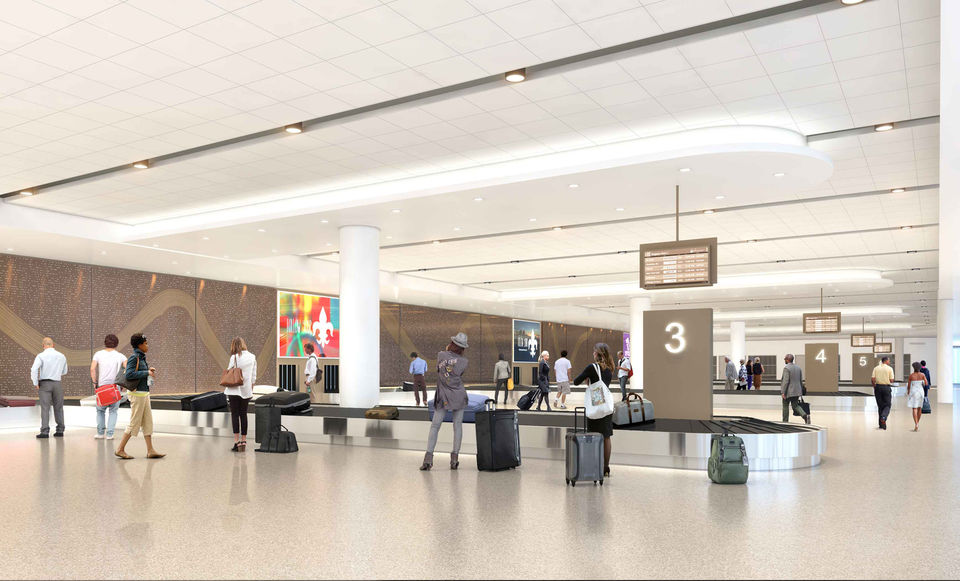 A rendering shows plans for the baggage claim area at New Orleans' new airport. (Courtesy New Orleans Aviation Board)
The existing parking garage will be used for long-term parking.

Burns said the parking garage at the existing airport will remain open and be converted to a long-term parking lot. The airport will provide shuttles between the old parking lot and the new terminal. 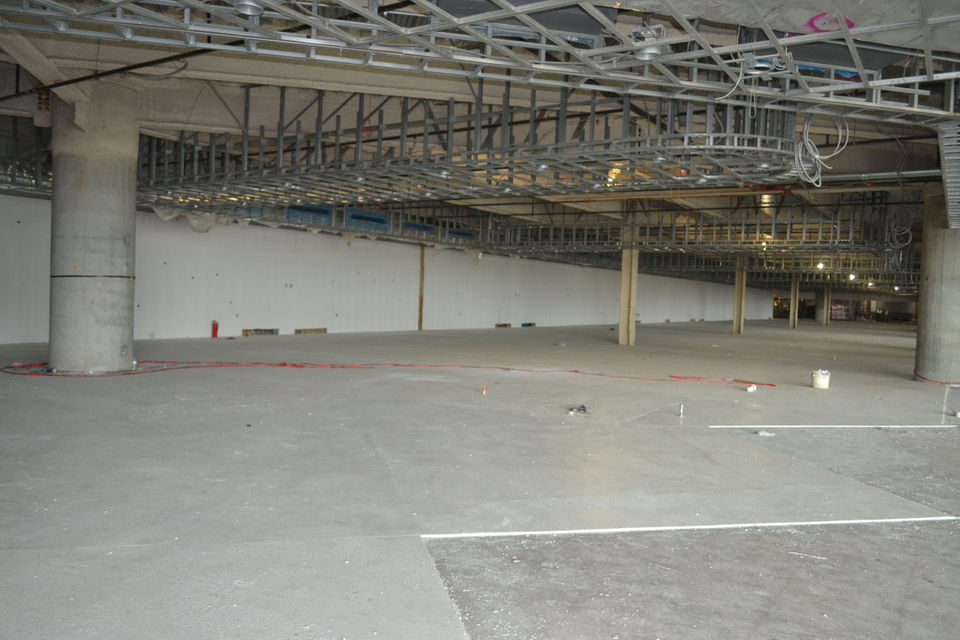 The baggage claim area at New Orleans' new airport as of June 2018. Construction is set to be complete by February 2019. (Courtesy New Orleans Aviation Board)
The rental car facility will also stay put.

In addition, the airport's rental car facility, which was completed in 2011, will remain where it is located next to the existing airport and parking garage. Shuttles will also run between the rental car facility and the new terminal. 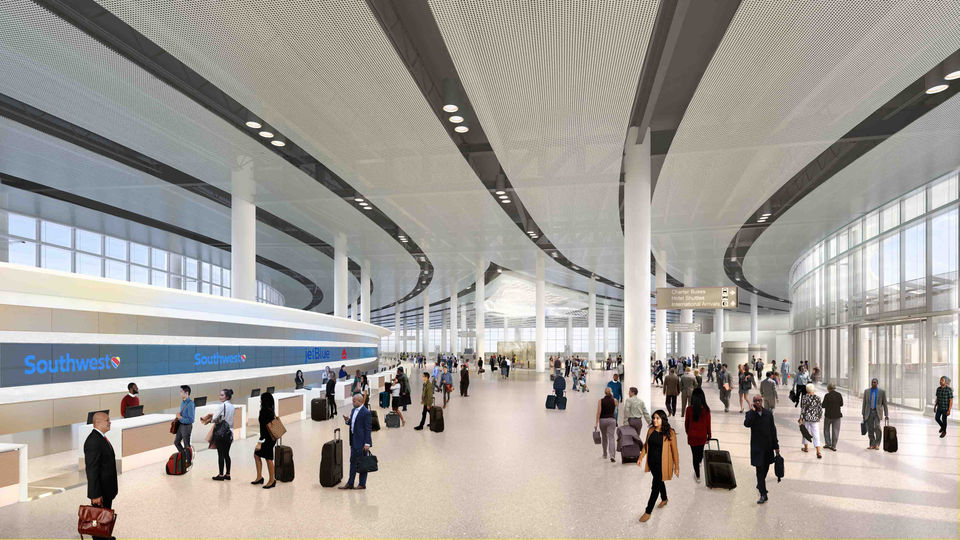 A rendering shows plans for the ticketing area at New Orleans' new airport. (Courtesy New Orleans Aviation Board)
Driving to the new airport terminal may be complicated, at least at first.

The new terminal will increase the number of passengers who can fly to and from New Orleans. That also means an increase in vehicle traffic to and from the new terminal. However, construction on a new $90 million flyover ramp from Interstate 10 at Loyola Drive isn't expected to begin until after the terminal opens. The new flyover ramp would replace the existing ramp at Williams Boulevard.

Until that is completed, drivers will have to take the Loyola Drive exit in Kenner and use Loyola to access the new terminal. Over the next few months, Burns said crews with the state Department of Transportation have been working to extend Loyola Drive to connect to the airport as well as widening its lanes to accommodate more traffic, a temporary solution as officials gather the funding for the flyover project.

Gov. John Bel Edwards has said the flyover project is a priority and that Louisiana will be able to get the money needed to complete it. In January, Edwards announced it as one of four projects he said will be part of a $600 million bond request based on anticipated federal money. The funding plan still needs approval from the federal government and state lawmakers. 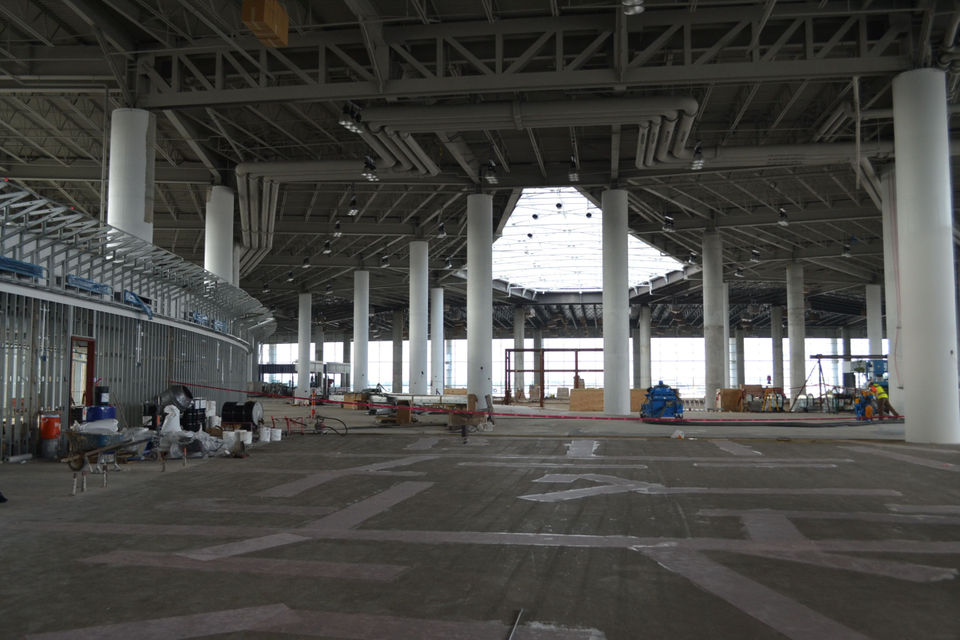 The ticketing area of New Orleans' new airport as of June 2018. Construction is set to be complete by February 2019. (Courtesy New Orleans Aviation Board)
The move into the new terminal will happen literally overnight.

While the move will occur overnight, Burns said the planning process will be about 18 months long once finished. The process includes everything from training airport personnel on every aspect of the new facility and testing all its functions, to making sure signage and the right amount of trash cans are in place.

Uber and Lyft pickups will be curbside.

No more walking to a parking garage to flag down a rideshare. Burns confirmed rideshare pickups will now have a designated curbside section outside the arrivals hall, similar to taxis. 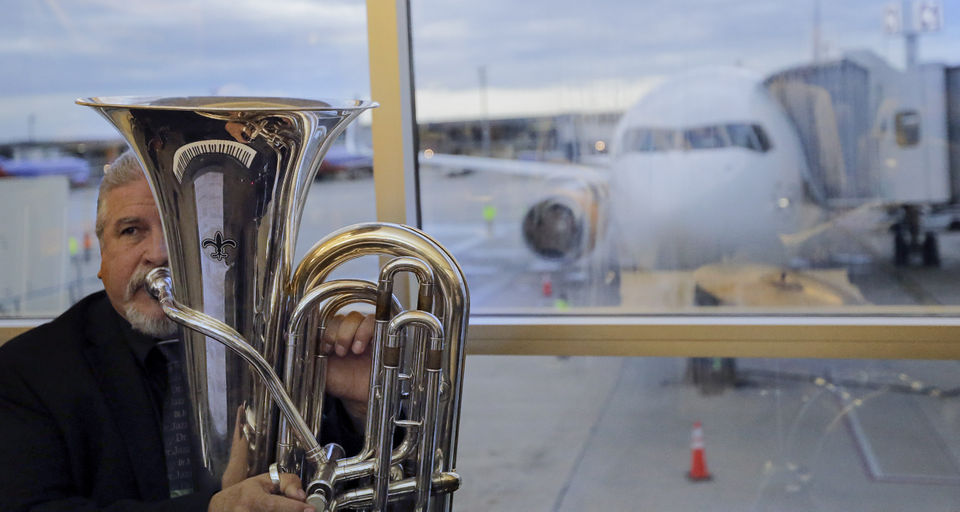