The Norwegian Star and Navigator of the Seas call New Orleans home.
By Mark Waller, NOLA.com | The Times-Picayune
November 26, 2012

Two new cruise ships arrived in New Orleans in November for six-month stays. The Norwegian Star, with its 2,348-passenger capacity, made New Orleans its home port, as did the 3,114-passenger Navigator of the Seas. 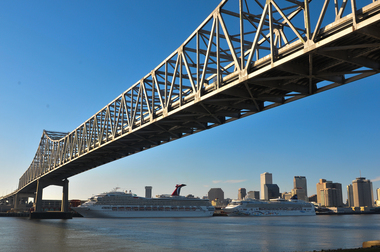 The Carnival Conquest and Norwegian Star docked in New Orleans in November 2012. Port of New Orleans

Norwegian Cruise Lines swapped out the smaller Spirit for the Star. And with the Navigator, Royal Caribbean replaced its Voyager of the Seas in New Orleans. The ships are based at the recently renovated Julia Street Terminal, according to the Port of New Orleans, and will take vacationers to locations in the Caribbean and Central America.

The Port of New Orleans said it set a port record for passenger traffic for a two-day period on Nov. 17-18, when 24,705 people embarked or disembarked from cruise ships. In 2011, 736,908 passengers passed through the port, placing it in the top 10 cruise ports in the United States. Port officials expect 1 million passengers by the end of this year. They cited a study that found the cruise industry generated $280 million in spending in Louisiana last year.