"Results from data collected by the U.S. Census Bureau prove that New Orleans is now the fastest growing city in America..." 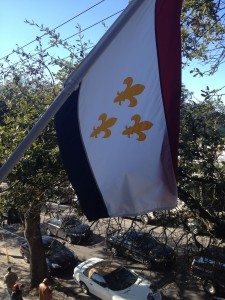 The lush branches of the majestic oak trees lining New Orleans’ historic St. Charles Avenue have never looked more glorious than they do now. Not even before Hurricane Katrina’s wrath, which left behind barren, crippled centuries old bark nearly seven years ago, have the oaks looked so strong, green, and healthy.

Pre-Katrina New Orleans also witnessed a lapse of weakening industries, an increasing outward migration of residents, a declining school system, and a corrupt political system. For decades, the city had been in a constant state of decline. However, Katrina’s devastation brought on new life for New Orleans. It brought attention to a city in need, restored love and appreciation to those who had taken advantage of it, and gave new opportunities to those individuals who were introduced to the city for the first time.

“Before Katrina, New Orleans was a deteriorating asset,” explained Michael Hecht, president and CEO of the region’s economic development organization, Greater New Orleans, Inc. “It was a city that had an uncertain future. Without proper leadership and under managed assets, no one was investing in it.”

Results from data collected by the U.S. Census Bureau prove that New Orleans is now the fastest growing city in America, but it doesn’t just represent a repopulation of a city that lost nearly sixty percent of its residents. After being completely evacuated almost seven years ago, New Orleans has recovered most of its population – a remarkable accomplishment for a city that was witnessing a significant out migration in the years before disaster struck.

Evidence also shows that the growing population is not just the result of returning residents, as newcomers have also been lured into the city. In fact, according to a study conducted by the Kaiser Family Foundation, one in nine current New Orleans residents were not living in the area prior to Hurricane Katrina. The group represents a demographic of people who are more likely to be younger and better educated, further contributing to the city’s recovery and reform.

“For a city that was completely evacuated, the phenomenon is that the people who came back, are back by choice,“ added Hecht. “If individuals did not believe in the future of the city, New Orleans would have never hit this inflection point.”

So, what has contributed to this phenomenal influx? Jobs, of course. However, they are not positions that were left unfilled from those who fled the city. They were created as a result of the city’s most promising assets – the city’s competitive advantage and secret weapon. It is a trajectory that I am calling the ABC’s of a city’s long-term growth and prosperity.

An enticing factor that has lured new industries and people into the city has been a result of the city’s financial assets. The high quality of life and low cost of living have been alluring to new entrepreneurs and residents flocking to the city. Living costs are more affordable as compared to the national average, while still providing its residents with the opportunity to enjoy a high quality lifestyle.

Aggressive tax incentives have also been beneficial in luring new recruits, entrepreneurs, and large business to New Orleans. In 2002, a foundation for a new film industry had been established with a tax credit program for movies produced in the state. However, it wasn’t until after Katrina that more production crews committed to continuing their work with Louisiana, and quickly saw the benefits of working in the region. In addition, the productions were pumping millions of dollars into the city’s recovering economy, and providing jobs to those who wanted to get into the industry.

With the increasing success from the film tax credits, more programs were gradually implemented within other sectors, such as digital media, bioscience, and sustainable industries.

Within a few years, New Orleans was becoming a destination for both new and established businesses that wanted to take advantage of the tax incentives and the low cost of living. As a result, new industries were emerging and creating a visible impact throughout the city, subsequently turning New Orleans into a magnet for entrepreneurial activity. According to data collected by The Greater New Orleans Community Data Center, 427 out of every 100,000 adults started up new businesses annually in the New Orleans metro area, a significant difference from the national average of 333 out of every 100,000 adults.

The influx of professionals and experts into the city also caught the attention of some major companies looking to relocate. In the past few years, New Orleans has welcomed Gameloft, Globalstar, Blade Dynamics, and General Electric, collectively bringing in over 1,500 new jobs into the city.

“The business community in New Orleans is roaring back,” said Mayor Mitch Landrieu. “Over the past two years, the city has become a hub of entrepreneurship and small business. We offer a climate that is conducive for both local entrepreneurs and major corporations. Clearly, the world is taking notice that New Orleans is open for business.”

A town filled with museums, live music venues, festivals, and rich food, New Orleans has always been, and continues to be, one of the most vibrant and culturally rich cities in the country. Katrina had no impact on that factor. The unique culture draws millions of tourists every year, and it is what makes people fall in love with the city over and over again.

In a recent poll conducted by Dentsu America, sixteen cities were ranked among thirteen different objectives. New Orleans ranked among the top three in nine categories, including the most romantic, creative, authentic, mysterious, and culturally rich.

The growth of the economy can also be attributed greatly to new leadership on all levels throughout the city. Mayor Mitch Landrieu has been a catalyst for reform, and has taken the steps necessary to bring New Orleans to its potential through strong leadership and proper management.

Collaborative efforts between several individuals and organizations have also been essential in attracting new jobs, industries, and individuals to the city. Economic development organizations such as GNO Inc., Louisiana Economic Development, and The World Trade Center are serving to promote economic growth through new business development at the regional, state, and international levels, respectively. Business incubators, including The Idea Village, Propeller New Orleans, and LaunchPad, have been essential in fostering the prominent entrepreneurial movement.

The Recovery School District has also been a catalyst for reform, aggressively turning around a public school system that was on the brink of deterioration. Today, New Orleans leads the nation in percentage of public school students enrolled in charter schools with 70%, and as a result, the number of public schools designated to have had “failing” standards has significantly dropped. Although not yet perfect, the standardized testing scores are improving, as well.

“There has been much innovation in education that has made our school system very attractive,” said Dominik Knoll, CEO of The World Trade Center New Orleans. “This, in turn, has made it possible to bring young professionals to the city who may not have chosen to live here in the past.”

Besides recently topping the list of America’s fastest growing cities by the U.S. Census Bureau, New Orleans has earned high rankings across several other areas, further confirming the prominent opportunities available in the city. In fact, Forbes named the Greater New Orleans Area No.1 Metro for IT Job Growth and No. 2 Best Big City for Jobs in the United States. Other accolades have included rankings as the No. 2 Employment Market in the Country, America’s Best City for School Reform, top city for entrepreneurs on two separate lists, and No.1 on the list of America’s Biggest Brain Magnets for drawing people under the age of twenty-five with college degrees.

The state’s progressing business climate has been the biggest factor in luring new industries and people, putting Louisiana on several accredited lists, as well. The state is currently leading the nation as the No. 1 state for exports and No. 2 for imports, No. 3 in film production, and No. 1 state for economic development growth potential by Business Facilities 2012 State Ranking.

The established confidence in the future of New Orleans has been evidenced through new infrastructures and the increasing investments being made throughout the city. The National World War II Museum is currently undergoing a $300 million expansion project, increasing the compound to four times the size of the original structure. Additionally, the airport continues to expand, continuously adding new international flights, as well as more efficient domestic flights, to the daily schedules.

With the opening of several new hotels, New Orleans has welcomed the nation’s biggest sporting events and has enjoyed a record-breaking year within the tourism and hospitality industry as a result. After remaining uninhabited for six years, the Hyatt Regency New Orleans made its highly anticipated return following a $275 million renovation, providing 433 full time jobs, 200,000 square feet of meeting and exhibition space, and increasing revenue into the city.

However, what is most encouraging is that both new and traditional industries show no signs of slowing down. Bourgeoning industries such as film and digital media will continue to see an increase in productions and skilled workforce with the recent extension of the tax credit. In addition, the city is approaching a $2 billion dollar expansion of the medical district, multibillion-dollar coastal restoration campaign, and imminent oil and gas boom, further continuing the city’s drive into prosperity and growth for the future.

After Katrina, much like the stronger oak trees, came new industries, new businesses, new people, and new purpose into New Orleans, creating a rebirth that has made a significant economic impact. The story that followed the events of Hurricane Katrina was not just one of resilience, but one of opportunity, renewal, and influence.