Industrial Development Board is generous with property tax breaks for developers

IDB has declined only one developer in 15 years, according to BGR 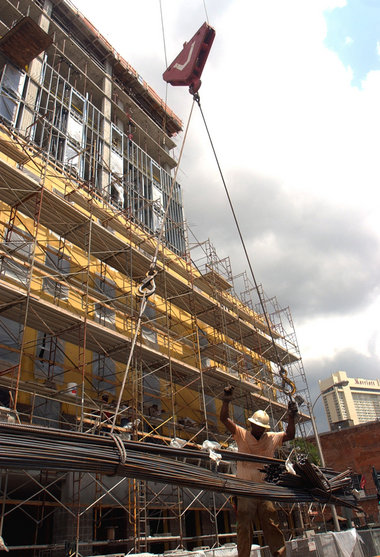 View full sizeTimes-Picayune archive
In June 2003, the $20 million, 17-story Staybridge Suites was under construction on the corner of Tchoupitoulas and Poydras streets. Four years later, a request for a property tax break for hotel expansion was denied.

The board said no to a 2007 application to expand the Staybridge Suites hotel at 521 Tchoupitoulas St.

To Janet Howard, president and chief executive of the government watchdog group, declining only one of scores of applications in 15 years suggests that the Industrial Development Board, a group of citizens appointed by the mayor and the City Council to help spur economic development, is basically a giveaway to developers.

"The cost is really quite significant for taxpayers," Howard said. "You would expect the sort of group that gives those breaks to have really rigorous policies and procedures in place for evaluating these things, but the IDB lacks very basic things that are necessary to do this in any kind of rational way. It's operating in a strategic void."

The Industrial Development Board, which was created in 1972 as a conduit for issuing revenue bonds, and which was reactivated in 1997, considers applications for payments in lieu of taxes, or PILOTs, which set taxes at fixed rates that are lower than what developers would normally pay. The rationale behind PILOTs is that some development projects generate enough in sales taxes and other economic activity that it is worthwhile to encourage the developer by offering him a property tax break.

Many industrial development boards around the state file annual reports with the Legislative Auditor in Baton Rouge, but the New Orleans board does not. The mayor's office was not able to say whether the board files annual audits with the city.

The board has been particularly active since Hurricane Katrina, because it wanted to address blight and a dearth of jobs returning to the city, and because prospective developers sought to magnify opportunities that came with the Gulf Opportunity Zone bonds, the tax exempt bonds made available by the federal government to assist Louisiana with business development after the storm.

Since Katrina, the Industrial Development Board has helped developers build or rebuild apartments, shops, a hotel and office tower by freezing their tax bills at below-market levels. The redevelopment of the city's "big four" public housing complexes have benefited, and many of the projects sprouting up in the Loyola Avenue-Superdome area use PILOTs as part of their financing.

Walter Flower, an investment counselor who joined the Industrial Development Board in 2008 and became chairman in 2009, said he can't speak to the board's work going back 15 years, but he takes issue with BGR's assessment. Since 2006, Flower said his board has received 65 applications seeking PILOTs. Of those 65 applications, 24 were granted for an approval rate of 37 percent.

The difference is that Flower's tally takes into account projects that were awarded PILOTs but never get off the ground and, as a result, never took advantage of the tax break.BGR, in contrast, tallies instances where the board actively told a developer it wasn't interested in the project.

Flower said his board conducts a cost-benefit analysis in evaluating every project to make sure the economic activity generated by a project is greater than the tax revenue given up. In recent years, the board has added provisions to increase the city's tax collections if a project ramps up more quickly than expected. The board also has developed a job match program with the Housing Authority of New Orleans, and now requires developers who get PILOTs to give 40 percent of the construction jobs on their projects to Orleans Parish residents.

"The city is giving them a benefit. They need to reward the city by hiring locals," Flower said.

The Industrial Development Board is also working closely with the city's economic development department and the NOLA Business Alliance, the city's public-private partnership for economic development, to create common policies so that developers know what to expect when they ask the city for economic incentives. They also hope to begin working with the city tax assessor to get a sense of what projects should be worth.

Aimee Quirk, Mayor Mitch Landrieu's adviser for economic development, said the efforts represent great strides for the city. "There's never been any kind of policy in place," Quirk said. "We're kind of excited because we don't know that it's ever been coordinated."

But, she added, it's a work in progress. "We still have areas to improve," Quirk said.

Howard said these efforts are not enough. While millions of dollars have been taken off the tax rolls for as long as 30 years, there have been no standards for what type of projects should be eligible for subsidy, few standards for what recipients must deliver to the city in exchange for the tax break, and no policies capping subsidies based on a project's value.

She also said that giving up millions of dollars of tax revenue in exchange for temporary construction jobs may not be the best use of city resources.

The result, BGR says, is that the Industrial Development Board has simply become an item on a developer's financing checklist, and the city may be giving away decades of future tax revenue on projects of marginal economic development value.

"The city has never really articulated a strong economic development policy to guide their investment," Howard said. "You look at the policies and procedures and you can't tell why someone is getting a tax break and someone else isn't."

Estimating how much property tax revenue is lost to PILOTs is difficult because once buildings are taken off the tax rolls, the assessor stops assessing them. Years ago, the assessor had to sign off on tax abatements from the Industrial Development Board, Williams said, but the practice was discontinued.

Williams said he's concerned about fairness and wants to make sure that any entity that should be paying taxes is doing so. To test a way the Industrial Development Board structures property tax exemptions, Williams sued Columbia Parc, the remake of the former St. Bernard housing project, and challenged its tax-exempt status. Williams lost in Orleans Parish Civil District Court, but the case is on appeal.

Williams said it's up to the Industrial Development Board to decide when it makes sense to give up tax revenue, but there ought to be mechanisms for determining whether a project is worth it. "The last thing the assessors office wants to do is be the cog that's stopping economic development, but there's got to be some standards," he said.

BGR says the fact that several projects given preliminary approval for PILOTs never used them, such as the downtown Home Depot and the Robert Fresh Market on Robert E. Lee Boulevard, suggests that the subsidies weren't critical. BGR also points out that in some cases the board granted more substantial breaks than originally contemplated.

The former Dominion Tower, New Orleans Center mall and garage, for example, paid taxes of $352,000 annually before being sold to Zelia LLC, a company owned by the family of Saints owner Tom Benson. The IDB's own economist recommended that the board set a PILOT of $193,000, already a substantial reduction of the taxes on the idle properties, but the board decided to cut the taxes on the property even further, and set the 15-year PILOT at half the original tax bill, or $176,000 per year. The PILOT didn't take into account the fact that the properties will be renovated and worth much more, BGR said.

The following month, when Poydras Properties Hotel Holdings LLC, developer of the neighboring Hyatt hotel, came before the Industrial Development Board, Poydras Properties said that since Zelia got a deal to pay half of its taxes as a PILOT, it wanted the same deal. The Hyatt owners were already paying a tax bill of $625,355 that was greatly reduced from the nearly $2.3 million they were paying when the hotel was open before Katrina, according to the IDB's analysis. Poydras Properties requested a payment of $325,000 for 15 years. Although the IDB's economist recommended a 10-year deal at $625,000, the board voted instead to do a 15-year deal with payments set at $320,000 for the first five years, then increasing in subsequent years based on the hotel's performance.

The board also ignored pleas by the Greater New Orleans Hotel & Lodging Association not to award PILOTs to the Hyatt because it would violate a long-standing principle of fairness.

At the time, hotel association executive director Mavis Early wrote the IDB saying that her group "opposes the use of payments in lieu of taxes for any hotel development. This procedure has never been used for hotels in the history of the city and sets an unfair competitive advantage to any hotel that would receive it."

Early noted that tax collections support the delivery of services in the city, and someone has to pick up the tab. "If these taxes are not fairly and consistently assessed, then ultimately, other taxpayers will bear the burden of increased taxes to pay for services and infrastructure improvements," she wrote.

An essential for developers

Developers say PILOTs are essential to getting projects off the ground.

Josh Collen, vice president for development at HRI Properties, said PILOTs are important to developers because they provide certainty about tax bills.That's especially important in the first few years, when the project is still ramping up and expenses are critical.

Collen said the cost-benefit analysis done by the city protects against bad investments because projects won't get approved unless they deliver economic benefits that are greater than the forgone tax revenue. He also said the city doesn't really lose anything because without the PILOT, the project wouldn't get built.

Collen said that HRI only asks for PILOTs that it believes it really needs. It asked for one on the conversion of the Hibernia Tower into apartments because commercial finance has been difficult in recent years, and the tax break was essential to making the redevelopment numbers work on a prominent but nearly vacant downtown building. Collen said the city's analysis has gotten more stringent, and negotiations over the Hibernia PILOT were challenging. "The city wasn't giving up any more than it needed to make the project happen," Collen said.

But Howard said that looking at whether a company can pull off the project without the tax break is the wrong question, because the developer may have not put enough of his own money into it, or may have made the project too extravagant.

What IDB officials should be considering, Howard said, is whether the project at hand represents the best investment for the city's future tax revenue. To evaluate that question, the city needs to have policies that can't be waived on what types of businesses are eligible for breaks. It should evaluate requests under different criteria depending on whether they purport to eradicate blight or create permanent jobs, with a formal scoring system and the size of any break tied to the level of benefit.

"No one sits down and says, is this a good investment? How does it compare with other investments? The basic questions that you would expect never get addressed," Howard said. "The end result has been this ad hoc, developer-driven process which allows the larger developers to take their tax rates down below the effective tax rates of people."

Quirk said the city looks at projects in a "holistic manner," taking into consideration their individual merits and whether they could be catalytic. Quirk said the city is trying to continually improve the process, and could soon have a joint policy document among different economic development agencies.

The Industrial Development Board and the city say they have stepped up their criteria for review, and are considering a scoring system, but they don't like the idea of hard-and-fast rules, because the city's economic development priorities evolve. "I think it can be helpful as a guideline. I don't think it's the final answer," Flower said of a scoring system.