"The strike appeared to involve mainly the independently owned cabs and small companies..."

By Bruce Eggler, The Times Picayune

A sizable number of New Orleans' nearly 1,600 taxicabs were parked Tuesday as owners and drivers staged an informal strike to protest new city regulations that will cost them thousands of dollars each. The strike appeared to involve mainly the independently owned cabs and small companies that pick up passengers mainly at Louis Armstrong International Airport and the city's major hotels. Drivers for United Cabs Inc., the city's largest taxi company, remained at work, and they and other fleets that did not go on strike picked up some of the extra work.

Because the striking cabbies chose a relatively slow Tuesday for their work stoppage, the overall effects appeared to be small, even though hundreds of cabs apparently took part. The strike was not announced in advance, and it was not clear when or whether the drivers intend to repeat the action.

At the request of the Landrieu administration and the city's tourism industry, the City Council this spring passed a host of new regulations for the taxi industry. 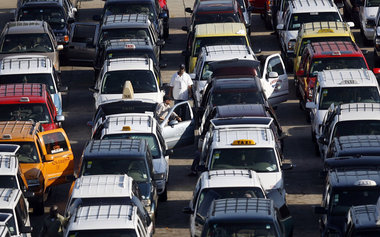 Taxis in the holding area at Louis Armstrong International Airport were photographed in May 2009. Times-Picayune archive

A federal judge recently issued an injunction blocking the city from enforcing ordinances declaring cab owners' permits, known as certificates of public necessity and convenience, or CPNCs, to be privileges and not rights, and making their transfer discretionary.

The city is enforcing those rules as cabs come in for their regular semiannual inspections, and many owners say they cannot afford the extra costs, especially the $20,000 or so they say they must spend to get a vehicle young enough to meet the city's new rules.