"Identifying middle of the week tourists is part of the strategy"

In their first joint presentation to the hospitality industry, the New Orleans Tourism and Marketing Corporation and the New Orleans Convention & Visitors Bureau reiterated Wednesday the industry's plan to drive 13.7 million guests to New Orleans by 2018 and outlined some of the ways they intend to get there. 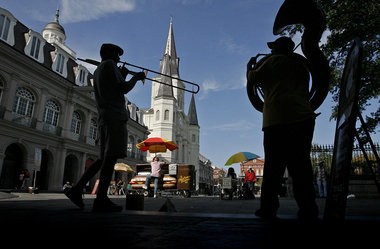 Much of the presentation was a rehash of efforts and advertising campaigns the two groups, which promote meeting and leisure travel in New Orleans, have being doing. Those efforts include promoting the city's festivals and working to land travel features in national publications.

But there were some novel, new ideas sprinkled in.

The marketing corporation, for instance, after identifying the middle of the week as a slow time for leisure travel, is working with the AARP and sites like the National World War II Museum to try to attract older visitors whose travel plans can be more flexible. Mark Romig, chief executive officer of the marketing corporation, said he would look to the group to fill the slower Sunday to Thursday time.

Meanwhile, the visitors bureau has created a separate website for information about destination weddings to address a growing market, said Kim Priez, who heads up the bureau's leisure group department. The visitors bureau also has created a special department called The Coterie to handle the accounts of small meeting groups of 10 to 400 people, a subset of the convention market that is sometimes overlooked.

Together the agencies are working to develop a set of metrics to measure their success.

This was only the second time in as many years that the visitors bureau has made its annual marketing meeting open to nonmembers. It was the first time the meeting included a presentation from the marketing corporation.

The change is part of the groups' new effort to work together following a bitter public tiff last year after plans to merge the entities failed. While the CVB primarily markets to groups and meeting organizations, the marketing corporation focuses on leisure travelers.

The two parties could not come to an agreement about whether the resulting organization would be public or private and who should comprise the members of its board. The visitors bureau had argued that it should be private, while the marketing corporation believed it should be public because it would receive public funds.

Although any plan to formally merge the groups is dead, they have vowed to be more collaborative. And on Tuesday, the members of each organization went out of their way to thank the other for being a gracious partner.

Darryl Berger, founder and chairman of real estate and investment firm The Berger Company Inc. and chairman of the marketing corporation, said the groups have "entered an unprecedented era" or collaboration and have left the "thorny and gnarly" focus on the merger.