A day after a local cab driver was killed in Hollygrove in an apparent robbery attempt, the New Orleans Police Department announced a series of training sessions on safety for New Orleans taxi drivers. The NOPD Cab Academy's first four-hour session will be Jan. 9. 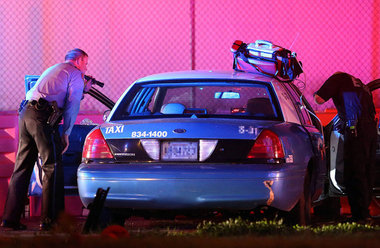 An NOPD officer shines a flashlight into a cab with a shattered window as a paramedic take vital signs on a cab driver found shot at the corner of Hollygrove and South Claiborne Avenue just before 9 p.m. on Sunday. He was dead at the scene. Michael Democker, Nola.com | The Times-Picayune

The training will also provide information about how to effectively report crimes to the Police Department while cabbies are on duty.

The announcement comes on the heels of Sunday night's killing of Joseph Wilfred, a 56-year-old cab driver from Metairie. Wilfred was found fatally shot inside a cab near the corner of South Claiborne Avenue and Hollygrove Street after his cab hit a construction barrier. Police believe the motive was robbery. Police have not released information about a suspect or suspects in the case.

In July, United Cab driver Ali Husnain, 44, was found dead inside a cab in eastern New Orleans after picking up a fare in the French Quarter. Husnain was shot after an apparent robbery, police said.

Twenty-two drivers have been killed in the line of duty since 1994, according to City Hall statistics.
site by Compucast Web, Inc.