Sewerage and Water Board vote on rate increase delayed

By Michelle Krupa, The Times-Picayune

Yielding to Mayor Mitch Landrieu's request to settle a handful of key concerns before pushing for steep rate increases, the Sewerage & Water Board on Wednesday delayed scheduled votes on the matters and vowed to answer the mayor's questions by mid-September. In an hourlong address to water board members, Landrieu, who serves as S&WB president, reiterated the points he made in writing Monday, starting with his request that the agency analyze options for making the rate jumps less steep than the proposed increases of 80 percent over five years, perhaps by spreading the revenue increases over a longer period or cutting back the services they're intended to finance. 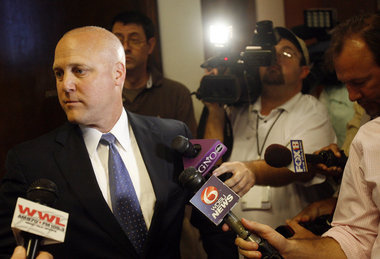 Michael DeMocker, The Times-PicayuneMayor Mitch Landrieu was photographed at a news conference Tuesday.

The mayor also wants the S&WB to identify planned customer service improvements, to quantify the number of new jobs that proposed capital projects would create, and to identify the consequences of keeping water and sewer rates flat.

Landrieu on Wednesday added a fifth directive: to recommend ways to alter the water board's governance structure in an effort to boost public confidence. Independent groups have suggested reducing the number of board members, shortening their terms and requiring appointees to have field expertise.

Landrieu said that despite years of work by consultants and top S&WB executives to craft the rate proposal, news media coverage of those efforts and a recent series of public hearings on the plan, residents and business owners don't yet know enough about the agency's needs and its spending plans to support the rate increases.

Most customers facing the near-doubling of their sewer and water bills also aren't thrilled at effectively having to shoulder years' worth of rate increases because local politicians for decades have refused to boost rates, he added.

"We cannot in this city continue to do what those that went before us did ... and that is to kick the can down the road," Landrieu said. "The political issue of convincing people today that they have to assume the burden that those before them would not assume is really complicated.

"In my experience in government, I have found that if you're forthright and the people really understand -- notwithstanding how hard it is -- will find a way to get it done," he said.

Landrieu said he's also not convinced the S&WB has exhausted all opportunities to streamline its rate proposal.

S&WB Executive Director Marcia St. Martin told Landrieu that her staff will answer his questions within 60 days. Several board members stressed that given the agency's dire fiscal straits, they want the matters handled as quickly as possible.

Meanwhile, Gentilly resident Steven Donahue said he and other residents simply cannot afford for their cost of living to rise.

"I've cut back, and I'm not going to cut back anymore," he said. "That's a purpose of a city, to provide basic services."