Street closures will begin as early as January 5th.

By Mark Waller, NOLA.com | The Times-Picayune

New Orleans officials on Tuesday unveiled plans for road closures to accommodate crowds for the Super Bowl in February. Closures around the Mercedes-Benz Superdome start as early as Jan. 5 and spread over several blocks by game day on Feb. 3.

Roads around the New Orleans Arena side of the Superdome will be the first to close, although they will temporarily reopen for Hornets games and concerts.

The next round of closures take effect Jan. 26, when the Poydras Street exits off Interstate 10 and Claiborne Avenue and the river-bound lanes of Poydras alongside the Superdome are sealed off.

On Feb. 1, the Friday before the big game, both directions of Poydras will close from I-10 to Loyola Avenue. All remaining roads encircling the Dome and Arena will close that day as well.

On Super Bowl Sunday, the closures along Poydras Street will extend from South Galvez Street to St. Charles Avenue; along Loyola Avenue from Tulane Avenue to Girod Street; on a stretch of Perdido Street from Loyola to Lasalle Street; and throughout the streets under the elevated I-10 from South Galvez to the Dome. Stretches of roadway dedicated to paid passenger drop-off will open along Perdido, Lasalle, Loyola, Tulane and Gravier streets. 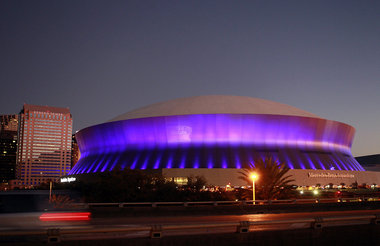 The Mercedes-Benz Superdome in New Orleans, site of the Super Bowl in 2013. David Grunfeld, The Times-Picayune

"For game day traffic, there will be a no-drive zone around the Superdome," New Orleans Mayor Mitch Landrieu said during an announcement of the plans. "This will become, for all intents and purposes, a pedestrian mall."

In the French Quarter, streets will close in a buffer around Bourbon Street stretching from Dauphine Street to Royal Street and Canal Street to St. Ann Street, starting on Jan. 30 and continuing to Feb. 4.

A wider area surrounding the Bourbon corridor, from Rampart Street to Decatur Street and Canal to Dumaine Street, will be accessible only to residents and businesses. A section from Decatur to the Mississippi River and Canal to Dumaine is subject to closure, depending on pedestrian traffic.

"This will become, for all intents and purposes, a pedestrian mall." -- New Orleans Mayor Mitch Landrieu