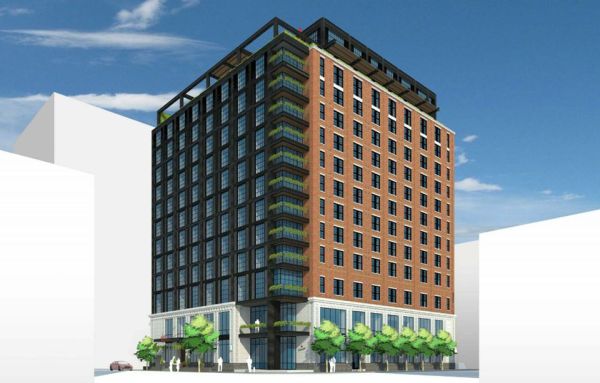 Developers behind the planned 14-story Virgin Hotel in the Central Business District hope to begin construction this fall. If final approvals fall in place in coming months, the hotel would be on pace to open in 2020.

The latest renderings and details filed with the City of New Orleans show plans for a main entrance on Baronne Street with a masonry warehouse-style facade of brick and cast stone. In addition to its 225 guest rooms -- the Virgin brand refers to them as "chambers" -- the hotel will have a rooftop bar and pool as well as a ground-floor common area aptly called "The Commons," with a bar, restaurant, library and "The Shag Room," a 482-square-foot lounge area. The restaurant dining area and a secondary entrance will front Lafayette Street.

The hotel, which will replace the current surface parking lot at 550 Baronne St., is among the latest proposed under the Virgin Hotel flag, started in 2015 as part of Richard Branson's Virgin Group conglomerate. The brand's first property opened in Chicago in January 2015 and additional hotels are under construction or planned in San Francisco, Dallas, New York, Washington D.C., Silicon Valley and Palm Springs. Buccini Pollin Group, or BPG, of Maryland is developing the New Orleans location.

The New Orleans City Council in 2015 agreed to allow developers to build up to 148 feet and 14 stories, waiving zoning rules that would have capped the hotel at 125 feet and 10 stories. The development team is now asking the city to allow it to build guest rooms up to the property line at the rear of the building, according to city records.

It also wants to be able to count the planned rooftop lounge area toward a density rule that requires CBD developments include a set amount of open space in their plans. The latter request has grown increasingly common, especially in the CBD and Warehouse District, where there has been a boom in rooftop development.

If they get the approvals this spring, developers anticipate construction could start by October 2018, and last 20-24 months, according to city records. That would put the opening sometime in 2020.

The hotel plans include a spa as well as a 2,049-square-foot ballroom and flexible meeting space on the second floor. They do not include parking.

At a Jan. 18 meeting, representatives with the development group told neighbors it intends to provide parking for guests through a curbside valet service. The majority of guests are expected to arrive via taxi, Lyft or Uber, or by foot, and the Baronne Street parking spaces currently bordering the property are expected to be converted to a loading zone for vehicles, said Todd James, a principal at Mathes Brierre, the project's general contractor alongside Broadmoor.